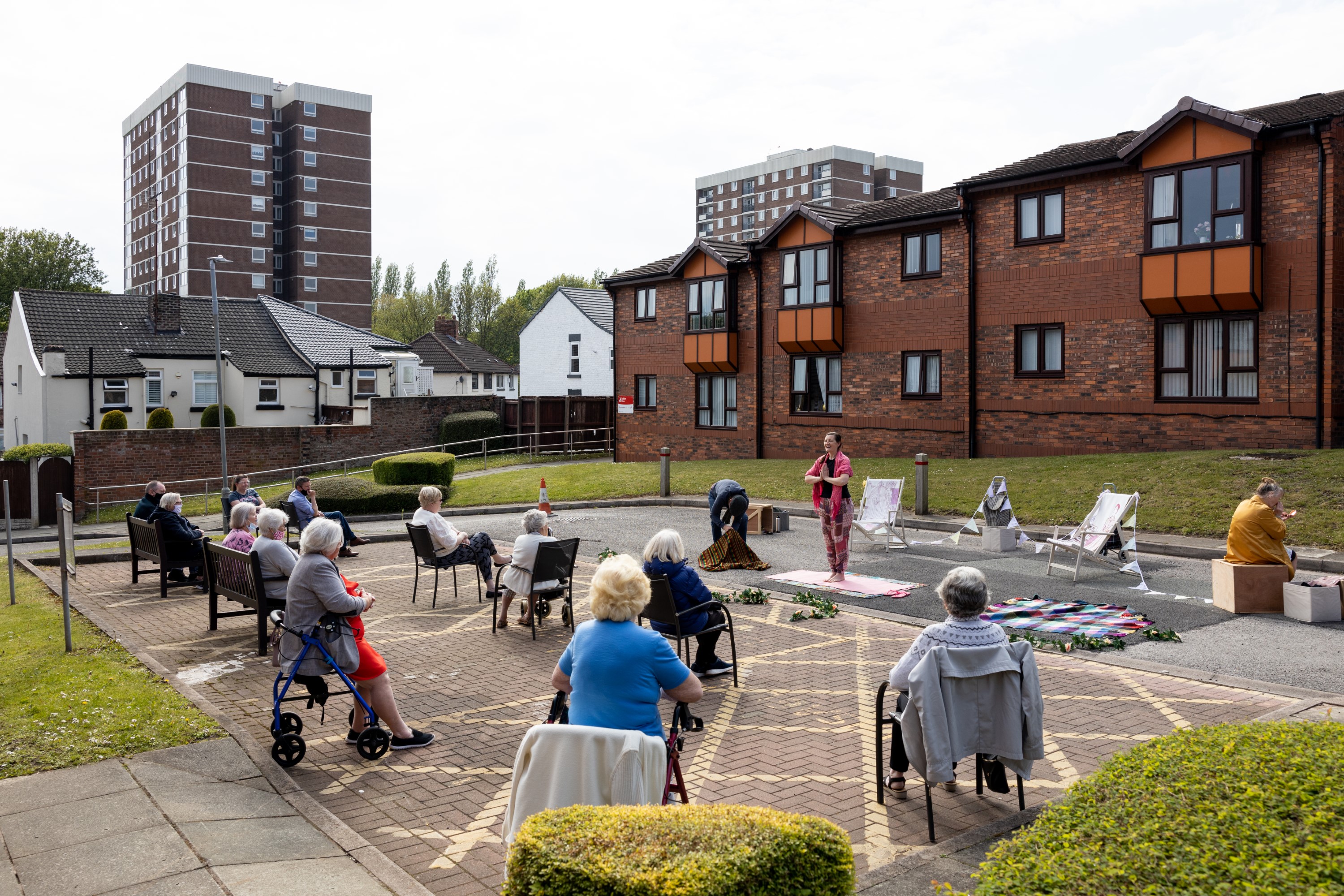 South Liverpool Homes (SLH) brought outdoor theatre to its Independent Living apartments at Cobden Place on Friday 14 May, with star of TV, film and theatre Eithne Browne heading up a poignant and hilarious series of monologues based on the lockdown experiences of tenants.

Eithne, who starred in Brookside, Emmerdale and Coronation Street played multiple roles alongside Emma Vaudrey and Liam Tobin during the 30-minute performance. The stage was set in the car park of our Independent Living scheme in Woolton, enabling tenants to enjoy the performance in a safe environment.

The project was the brainchild of Elaine McNeill from Free Monkey Mind – an organisation who produce arts and health activities for older people in Liverpool. The play, ‘Silver Bells and Cocktails’ was written by Esther Wilson and Emma Vaudrey, based on the real-life lockdown experiences of tenants.

Speaking before the performance Eithne explained: “They interviewed people and chatted and got all these lovely tales in and then turned them into monologues which we, as actors, then perform.

"The idea being that there are three of us performing and we'll all play three or four characters during the course of the entertainment.

"What we are doing is reflecting the actual life stories of how it's been for people during these past 12 months or more.

"For people who haven't been able to go over the doorstep. For people who've lost loved ones, for people whose lives have changed completely because of Covid.

"Some people have felt isolated, lonely and uncared for. Some people have been glad that they've been in a caring environment like the one here, where they know they're looked after.

“It was to break that really and bring them a little bit of joy."

June Murphy, Scheme Manager at Cobden Place said: ‘What a wonderful afternoon the tenants have had! For some of them, this is the first time they have got together for months so it was lovely to hear them laughing and singing along with each other.

“The writers chatted to many of them prior to the play to find out their experience of lockdown over the past year and it was a joy to see this incorporated into a play which was truly heart warming and very funny.

“We are hoping that they will perform again at our other Independent Living Scheme in Woolton.”

The play was a hit with tenants who enjoyed some rare May sunshine outside, while some watched on from inside their apartments.

“It was first class, very clever. I didn't realise you could get so much entertainment in a car park with three people!"

"It was brilliant - it was lovely to be outside seeing something.

"They put everything we thought into words." Join Boxing for Health with SLH and Gemini Boxing Club Welcome back to The Market Place!